Danger in the desert

the road between San Pedro and Calama (which has the nearest airport) is quite smooth and well marked for the many steep hills and sharp turns as it crosses at least three ridges of Andean foothills. Approximately 10 km northwest of San Pedro is what I suspect is the longest stretch (my guess is 3 km) of straightaway on this 90 km journey. When we visited the rainbow valley we had seen the wreckage of a terrible collision between three vehicles smack in the middle of this long piece of straight road. I was ready with my camera as we approached the site on our way to the airport on 21 January. Here is a view of the straight section of road: 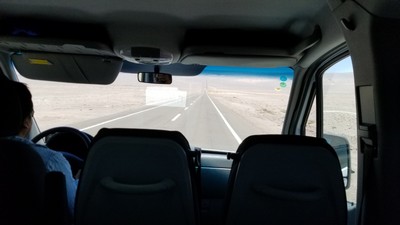 It appeared that two pieces of wreckage had been removed during the previous 36 hours; one a white semi tractor, and the other, a car or van that had been shredded. There remained this part which seems to be the remains of another semi tractor. It's a haunting memory and a grim reminder that not all that you may see on your travels is pleasant. 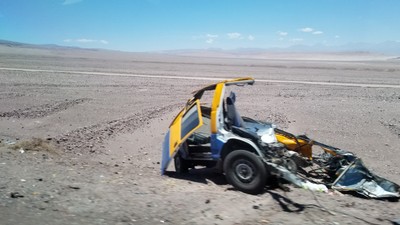 Posted by judgelarry 08:01 Archived in Chile

Previous Next Table of contents

Comments on this blog entry are now closed to non-Travellerspoint members. You can still leave a comment if you are a member of Travellerspoint.

If you aren't a member of Travellerspoint yet, you can join for free.